When my son was in grade school learning to write, he was taught to create a sloppy copy first--what we call a draft copy. It was a great way to teach kids how to get the words on paper and tell the story. I watched as kids poured words onto their pages as if they were using paint and brush. So many had no fear, which taught me a lesson.

For years I wrote copy for ads, press releases, radio commercials, brochures and the like. Sometimes it was tough, like pulling teeth. While not as difficult, I still feel the same way sometimes with my drawing and painting. No matter what I do, I find myself not exactly getting the essence of what I want to express. My go-to action is to step away for a while. Put the project aside and concentrate on something else. Invariably, I usually come back with a refreshed approach and bam! I get it from the start (BTW, the same happens with my writing).

But what happens when taking a break doesn't work. Then what? Well, I start a bit differently. Now, I'm going back to what the great artists have always done. I'm making sloppy copies or preliminary drawings. I also call it visual thinking. Einstein said it perfectly:

“…Words or the language, as they are written or spoken, do not seem to play any role in my mechanism of thought. The psychical entities which seem to serve as elements in thought are certain signs and more or less clear images which can be “voluntarily” reproduced and combined…but taken from a psychological viewpoint, this combinatory play seems to be the essential feature in productive thought — before there is any connection with logical construction in words or other kinds of signs which can be communicated to others.” —Albert Einstein

Notice these sketchbook entries by Michelangelo and da Vinci. They both are working out some sort of issue, using visuals instead of words. 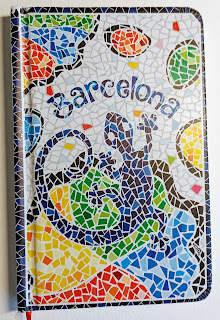 I actually started this process several years ago when traveling. I was in Barcelona and purchased a small  3.5 x 5 blank book in a souvenir shop. Normally when on the road, I would take a photo, create a three-minute (or less) drawing, and I later develop it into a more complete sketch in my traveling journal.
Instead during this trip to Spain, I created sketches with abandon. I just got the "facts" down, and worried little about what was right or wrong. It was freeing. All done in graphite pencil, the subjects were lively, contemporaneous and honest.Since then, I purchased small books for my students when we went on different trips. And I believe  a lot of them found it freeing as well. Recently, a student told me she occasionally looks at her book from the trip to Canada.  Here a some samples from my "sloppy copy" Canadian book. 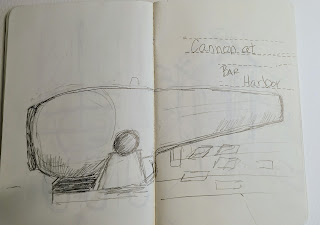 Now several years later, I have expanded this process to include my studio. For years, I would select a subject, and after gathering my supplies, start immediately. Since I work mostly in drawing and acrylic painting materials, I don't really have to do much planning. If there's something I don't like, I can either paint over it or just erase (even with ink, I can use gouache to correct my mistakes). However, recently I've been trying to pre-draw or create sloppy copies, sketching my thoughts of what the subject looks like with key elements of color, placement, values and so on.
This isn't a new idea. Most of my teachers pushed the thumbnail sketch, defined by Merriam Webster as:

Thumbnail sketches are small sketches used to plan out your painting before you begin. They're typically only 2–3 inches in size, so they can be quickly drawn and easily changed if needed. This makes them very helpful for artists who want to simplify or update their compositions.

But I'm actually talking about taking this one more stop further. How many times have you encountered a project that you think may be too over the top for you. So you may reject it--"too hard for me, I want this to be fun".
I'll give you an example of a class I just taught. It was a flower petal with a rain drop on it. Of course anyone can draw the flower petal and be done with it. But the rain drop? That's a bit tricky. But what if I told you that you can use a separate piece of paper and simply draw the drop, over and over again until you felt you got it. You're creating a sloppy copy haven. It doesn't matter how many times you have to draw the same thing. You are just learning, creating on the go. No judgement. No rules. No critic. You are playing, experimenting. Hopefully having fun at the same time.
Of course, being a bit anal, I have now started a sketchbook that includes my trials and experiments--not to punish myself by preserving my imperfections--but to help me that next time I want to create the same. I'm also filling the book with painting formulas, ideas for future works and well, whatever I want. It's not only a good record, it's also fun to do. So far, a lot of my stuff is from demonstrations done in class, which is perfectly fine.
While I always advocated "just getting the words on paper and revise later, " I'm glad I've finally started doing the same with my art work. The best part is the internal critic seems to have vanished.
What's new in the studio? 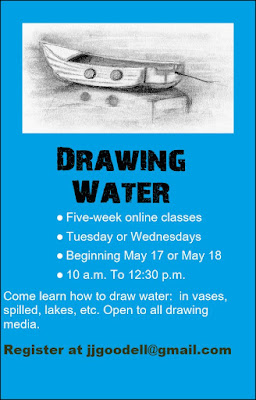 One more thing. I used to have this flyer on my bulletin board in my office when I was in advertising. It's amazing how many people want to change your writing! This kept me sane for over 20 years! 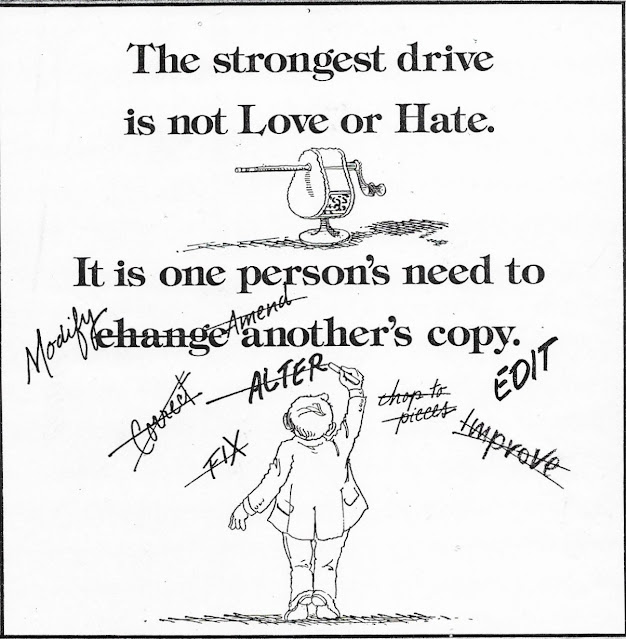 Posted by Jill Jeffers Goodell at 2:26 PM No comments: