Tuesday nights. We spent one week each various parts of the face: the eye one week, the nose the next, and so on. Near completion of the class we put all the pieces together and painted two

portraits: one in watercolor and the other in oil pastel. Everyone did a spectacular job, considering for some, it was their first attempt at creating a portrait using a different medium other than pencil.

I have to say I was rather surprised myself, as I've always shied away from watercolors. In fact, I've battled with this medium so much, I've been known to call it my nemesis. I wanted to teach skin tones. So, believe it or not, I decided to use watercolor and why not mix the skin tones by using just the primary colors (someday I find that loose screw rolling around in my head)!

With that challenge in mind, I began to experiment. I knew I could make some browns and/or grays by mixing my complimentary colors (those opposite each other on the color wheel), but what about all those little nuances of color on the face. I spent the next couple of days mixing my three Daniel Smith primaries with abandon and really had some fun. Here are some things I discovered and passed onto my class.

I use Daniel Smith primary triad: Perylene Red, Hansa Yellow Medium, and French Ultramarine. I like Daniel Smith because the colors seem to mix better than others. They are

After “playing” with my paints, I came up with this formula for a base skin tone: 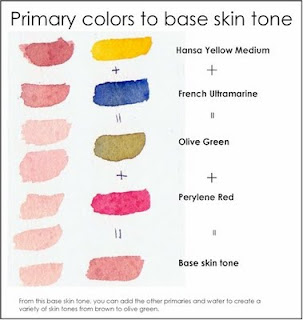 What’s fun is that by adding the other three primaries to this base skin tone, you can create so many other skin tones.

So how in the world was I supposed to teach this when I feel so inept when it comes to watercolor (even though I have lots of friends and students who tell me otherwise). Well, I guess I had to do what I always preach—just jump in and go for it.

I selected one of the photographs we were studying and began my process of sketching, then laying in the first colors and then onward and upward, as they say. I took pictures along the way, so that you could see the progression.

While I still don’t consider myself a watercolorist, I must say I am proud of this one. Feel free to try it yourself.

Before I close I want to tell you about new blogspot that I think is going to be fun. It’s called The Virtual Paintout. You visit an area via Google Maps and then paint it, just as if you were there. Google Maps has also offered their map pictures into common copyright, so there’s no problem there. Check it out. This month, the paintout is Lisbon!