Now that we've covered the topic of how to read a paint tube, let's delve into what's in the tube: the paint, well actually the pigment. All color media, be they watercolor, acrylic, oil, colored pencil or pastels, are comprised of pigment and binder. Wikipedia defines pigment this way:

"A pigment is a material that changes the color of reflected or transmitted light as the result of wavelength-selective absorption."

I just like to think of pigment as the colored stuff. Below is a picture of natural ultramarine blue pigment. Before the invention of the painting tube, artists would mix their own paints, creating or buying the pigments. Today ultramarine blue is usually made in the synthetic form--that's a good thing because the real stuff is still very expensive. 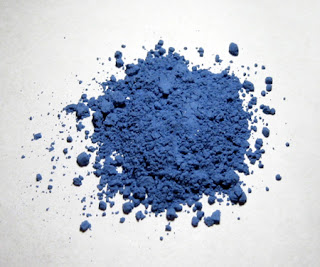 Some history
Pigments have been with us since the cave. Our early ancestors used earth colors gleaned from crushed rock--such as ochre, a soft stone that comes in a variety of colors from yellow to red. Whites were made from limestone or shells and charcoal from the burnt wood in the spent fire.

Up until the 19th century, pigments were made from natural materials: rock, plant or insect and yes even urine. Every pigment we use on our palette, through our colored pencils or pastel sticks has a story. Some of it is absolutely fascinating. In fact, by learning some of the background in pigment-making, I've come to a better understanding of the colors I use.  And because of that,  I'd like to share the information with you for the next several issues, starting with red.

Today there are so many reds on the market, it could make your head spin. There are three ways you can get a handle on this: (1) go to the manufacturer and read their color charts, (2) go to a great site called Paint Making by author Tony Johansen or (3) do all of the above, plus create your own color chart.

Create your own color book
Like everyone else, I have a ton of painting tubes (and brushes) of all sorts of colors. So in order to familiarize myself with everything I have, I decided to create my own personal color book. I also did the same thing with my colored pencils and pastels, but on separate sheets instead.


Below you can see the results of what happened when I took all my red watercolors and acrylics and painted them into some charts within my notebook. I also took notes to remind myself of what I had learned while studying about red pigments. Now I can see at a glance what colors I have AND more importantly what color(s) I need.

Acrylic and Watercolor Reds
Feel free to follow along with me, charting your colors in your studio. I will be charting the rest of the pigments that I'll cover in the next several issues. Later I want to talk about mixing colors as well as warm vs. cool colors. I hope to visually record these discussions in my color book. It should be fun!

Posted by Jill Jeffers Goodell at 5:18 PM No comments: