July 2014 My inspiration and an Art Shop

Fourteen years ago, my family and I lived in England. Since I didn't have a work permit, I had to put my ad business on hiatus until we returned to the States. This was the first time I had not worked since the age of 15. It was a little bit weird at first, although I sort of enjoyed the lack of pressures and stress. In time though, Alex, our 12-year-old son, and I got bored. We needed something to do. We were walking every Wednesday with our neighbor. Of course we read, shopped and traveled as much as we could to other villages and towns. But we needed more. 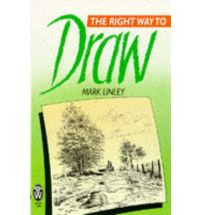 A visit to a small art shop
One day while visiting in a nearby market town, I ran across a small art shop. I'm talking really, really small. On one of the few shelves, gracing their walls was a book, entitled, The Right Way to Draw by Mark Linley. I hadn't done any real drawing for years. In fact, most of my advertising work was designing and writing copy. The computer age had tossed me into creating in front of a screen, either designing/writing ads or creating websites. My pencils, pens and brushes were gathering dust along with my other graphic tools.

Big things can happen from small acts
Does anyone ever know when one small act can change an entire life? That's what happened when I purchased this book. I spent less than ten dollars that day, without knowing how rich I would become (not necessarily monetarily) in the years ahead.

I took the book home. Alex and I poured over it and we began to following the author's instructions. Inspiration abound. I bought some real art pencils and a sketchbook. Alex was so interested in getting back to doing something with his hands, he opted to start putting model cars and airplanes together. We even bought a small table and tried to make the garage into our "art studio." Unfortunately, it was too dark, so we did a lot of our work outside, when it wasn't raining.

Your life can change when you least expect it
Picking up the pencil again to create art was life changing for me. To be honest I didn't
even know if I could draw. For years I had handed off my sketches and designs to illustrators. So putting pencil to paper in order to create life-like or somewhat realistic work was hard for me to fathom. Secretly, I believed what I had been taught in my college art classes: only the talented can draw!

Of course my drawings were primitive in the beginning. But most importantly, I liked doing it! I would set upon a subject and the time would fly by. Every worry or concern melted away while I added line here and shadow there. I eventually bought Linley's other books The Right Way to Draw Landscapes and The Right Way to Draw Flowers. I still own them today and all three are yellowing with age.

All three of these books are simple both the text as well as the examples. There's nothing elaborate at all inside. But the key was his first chapter in the original book, entitled, You Can Learn to Draw. He goes on to explain that we should all expect mistakes, be willing to learn a new skill, have the courage to think positive, be patient and use the right materials.

Drawing is a skill
From this small book purchased in an ever so small art stop in England, I began to draw. I did so every day (I still do) for the last 14 years. It was hard in the beginning and yes! I made lots of mistakes. What I learned though is that drawing is a skill that can be learned just like tennis or piano. It's take commitment. The difference between someone who can draw and someone who can’t isn’t talent at all. It’s being willing to work at it through trial and error, through practice. There’s no magic pill. You put the time in, you get results!

As most of you know, the rest is history. I returned home and took out every book I could find in the library on drawing. I signed up for drawing and painting classes. I started to create a small library of my own art books--really treasurers sheathe between two covers. And while I've been in art commercially since I was 18 years old, I eventually left that behind to begin a whole new world in fine arts--and I've never looked back. I've been given the rare opportunity to share my knowledge and skill to others through my classes and workshops. And I have Mark Linley and that small art shop to thank. Without them, the whole story would have been different.

Posted by Jill Jeffers Goodell at 12:24 PM No comments:

Well, we’re back from our sketching trip to England. We've had a wonderful time. Our accommodation, the Chiseldon House Hotel, was absolutely wonderful. Students have told me they were apprehensive because the hotel is in such a rural part of the country—even wondering if there were bathrooms in their room. Yes, they are all “ensuite.” 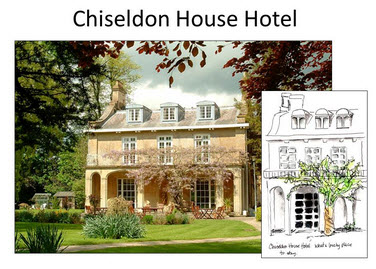 The first day we all got settled into the hotel and then went on a tour of the village. Chiseldon dates back to the Bronze Age, but historically (that is, written history), can trace its roots to Alfred the Great, when he and his son willed the village to the monks at the abbey in Winchester. As an American, it’s hard to fathom that someone can will an entire village to a group of people. But things were (and are) different here. To this day, a lot of the land in and around Chiseldon is owned by one family, awarded to them hundreds of years ago.  I can see why our ancestors were so thrilled to be able to own land.

One of the fun spots to sketch in the village includes the hotel. Dating back to 1825,Chiseldon House was once home to the Browne family and sat on a huge estate. During the two wars, their carriage house was used as the fire brigade. Our accommodations were lovely, including a scrumptious breakfast each morning and a light lunch in the afternoon. The grounds are rather elegant and serve as a backdrop to all sorts of sketching.

The village today is home to 3,000 people and has a primary school, several thatched cottages and a church that dates back to 900 A.D, although the current building was built around the 13th century. Back in the 1880s a railway ran through the center of the village, but was closed in the 1960s with the tracks and any remains removed by 1968. Actually it’s quite hard to imagine that a railroad used to exist here. Below is a picture of the village green where the station sat. 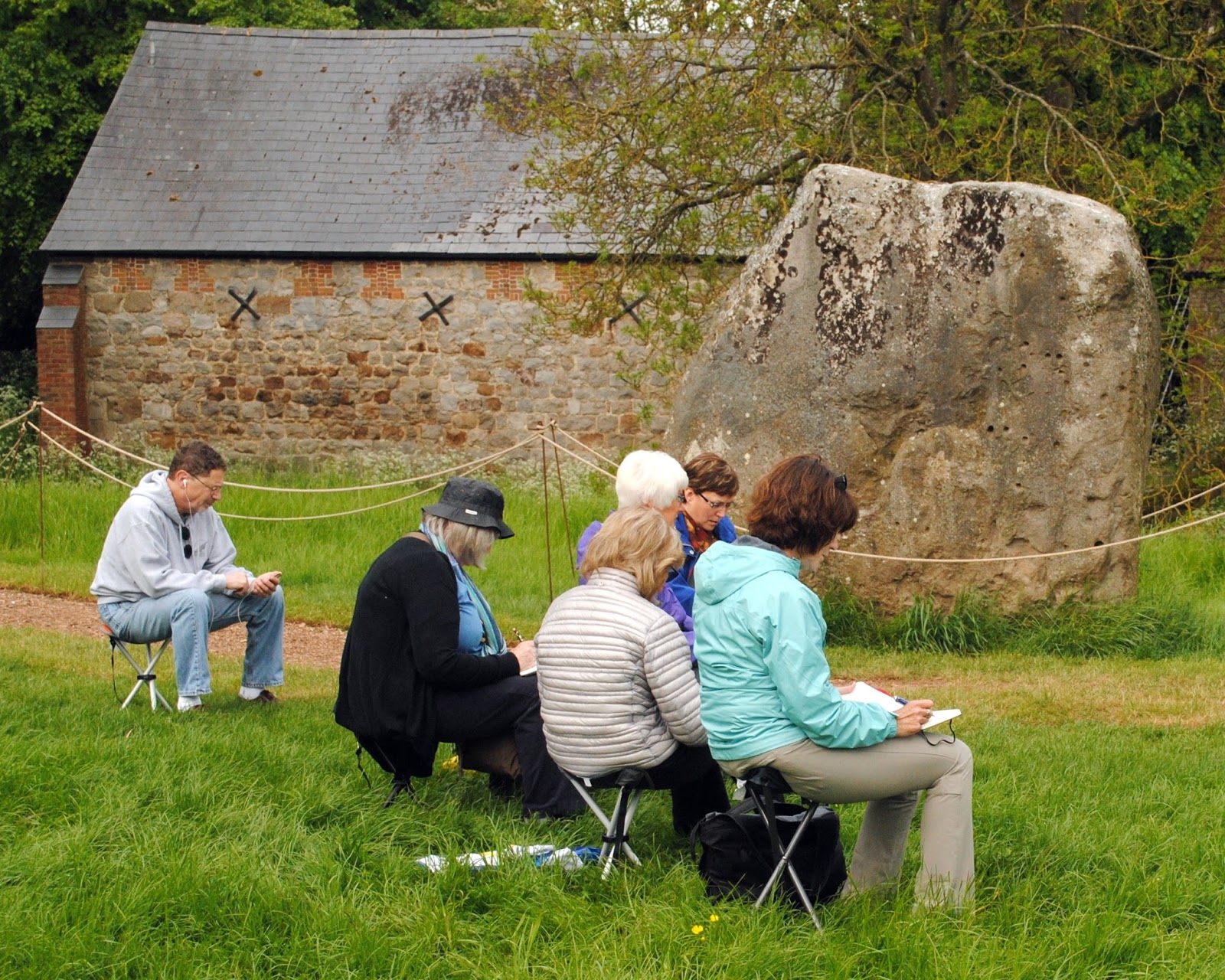 On our  first full day we visited the village of Avebury. Although everyone knows about the giant rocks in Stonehenge, this village has them quite literally around their homes. Actually, the settlement was created thousands of years after the creation of the stoned henges. What's very cool about this place as opposed to Stonehenge is that you can go right up and touch each stone as well as enjoy the free-range sheep grazing in the area.

Marlborough
On Wednesday, we ventured into the market town of Marlborough—famous for the royal Severnake forest, St. Peter’s Church (now redundant) where Wolsey was ordained, picturesque River Kennet, colorful gardens and its lovely high street. Unfortunately, this was one of our rainier days. I was so disappointed because I had visions of us sitting by the river drawing ducks, geese, flowers and landscape. Instead we were limited to taking photos and sketching inside St. Peter's. But not all was lost. We did  have an early afternoon "cream" tea (tea served with scones, clotted cream and strawberry jam) at Polly's Tea Room--a must for every visitor.

Afternoons free to explore
Well located, Chiseldon is an easy twenty minutes to the train station that takes you to London, Oxford, Bath, Cardiff (Wales) and other interesting places. After a few hours of sketching on location (when it wasn't raining) or inside the hotel, students took off for an afternoon filled with exploring new places and new sites.

Most days we spent exploring the village and sketching different locations. The village is just chock full of places to sketch. We also learned about the history from it's ancient days before recorded history, it's rural years, the railway days and up to the two world wars. Chiseldon was the site for a major military camp in WWI and WWII. In fact our military base was first situated in Chiseldon with its own hospital, serving over 30,000 wounded.


Techniques learnedAlong with having some time to sketch new subjects, the group also learned a few sketching techniques, such as:

A good time had by all.
In total 12 Americans descended upon Chiseldon the last week of May. Seven students, four companions and me. Not only did the students have a good time, but I think some of the villagers who met us enjoyed our company too. It's sometimes enjoyable to be different and while all of us could pass for English, the whole mystique melts away when we opened our mouths--yes, heads do turn and usually with a smile.

This sketching trip was so enjoyable, I'm considering planning another one back to England next year around the same time--maybe a little later. Since Chissy's weather is very much like Portland, we never can guess what the weather will be like. One thing is for certain, it can rain and drizzle, but we sketchers are made of strong stuff!!
Posted by Jill Jeffers Goodell at 3:16 PM 1 comment: