Eva Gonzales's pastel painting fetches over $2.5 million. Have you heard of her?

Unlike the other women we have studied thus far, there’s not much readily available information on Eva Gonzales (1849-1883). This may be attributed to her early demise at 34 or just plain indifference to the female artist during the Impressionist era.

A case in point is that just weeks ago, one of her pastel paintings, La Demoiselle d’Honneur, fetched over $2.5 million when the auctioneers at Sothebys only expected $400,000 to $600,000. I didn't find the information by googling Eva's name, but instead by googling her son's, Jean Raymond Guerard because it had originally come from "his" collection. I was stunned to read the article in Auction News, covering the sale, where Eva is referred to  as Manet's student, although she was only under his tutelage for a few years.

Speaking of the painting sold at auction, the writer says,
It was an Impressionist painting that provided the highest price of the New York sale...when a pastel by Manet student Eva Gonzales, La Demoiselle d’Honneur, sold for $2,546,500, more than four times its high estimate of $600,000. Gonzales, who died in childbirth at just 34, enjoyed considerable critical success in her lifetime. Manet’s only pupil, she was heralded by no less than Emile Zola, who called her the “naturalist artist of our times.


Why is Eva referred to as only Manet's student? Let me ask, do we refer to Michelangelo as Doenico Ghirlando's student? No Michelangelo stands on his own--not on the shoulders of his teacher.

Perhaps because she lives in Manet's shadow, we don't know much about this prolific artist, who in her short life, produced a wealth of drawings and paintings, a quarter of which were in pastel. While she was certainly influenced by her teachers, Charles Chaplain, Gustave Brion and Manet, I do believe she should be studied and honored in her own right, not as someone's pupil.

Born in 1849 into an artistic family, Eva’s father was a popular Spanish novelist, while her mother was an accomplished musician. Within 16 years she was in artistic training under the guidance of Charles Chaplin, who also taught Mary Cassatt. Along with learning about portraiture techniques in oil, Chaplain introduced her to pastel. As mentioned above, she also studied under Gustave Brion, who was a noted painter but most popular for illustrating Victor Hugo's Les Misérables and The Hunchback of Notre-Dame. No doubt she received illustration skills from this master. He drew over 400 illustrations for both books.

One can readily see in this early oil on canvas, A Bouquet of Violets, that even at the early age of 16, she was well on her way to creating lovely work. 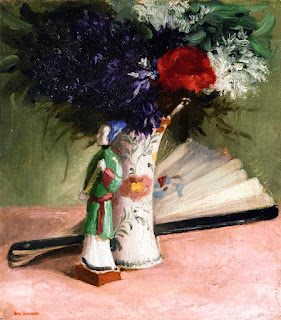 Eva met Manet through a mutual friend in 1869. She subsequently  became his sole pupil,  occasional model and close friend. His influence can be seen in many of her works from the early 1870s.

This was also a very turbulent time for Parisians with the grey cloud of impending war with Prussia swiftly moving into place. Many left the city, including Eva and her family. One of their "escapes" in the past was the small town of Dieppe, France, a port on the English Channel. It was during these frightening years that Eva seemed to blossom, experimenting with pastels and other media. Upon returning to Paris, Eva married Manet's printer, Henri Guerard.

Berthe Morisot, if you remember, married Manet's brother. She, Eva and Edouard would often paint together.  As with any triangle, especially with a young woman such as Eva mixed in, tension ensued. Berthe was apparently annoyed by Manet’s praise toward Eva. After all, hadn’t Berthe introduced Manet to her Impressionist friends? Hadn’t he called her the “dark beauty,” even creating a lovely portrait of her? Now this younger student had come onto the scene, which irritated Berthe. When Manet praised Eva as having “bearing” and “perseverance,” Berthe wrote her sister saying, “I’m not capable of anything.” It must have been interesting to see the three of them in action. 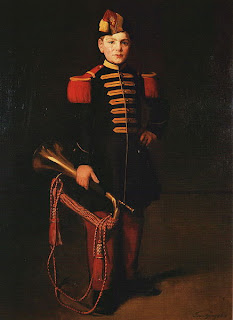 Nevertheless, Eva made inroads early on. In 1870, she was exhibiting at the coveted Salon in Paris with two paintings, L' Enfant de troupe and Portrait of her sister Jeanne.

Her works continued to appear at the Salon even up to the year of her death in 1883. While some paintings were occasionally rejected, she exhibited rather often--an astonishing feat considering she was a
"woman."


Interestingly, she never showed at any of the Impressionist exhibits, but is considered one as she painted in that era. As time went on Eva began to develop her own style as you can see below. Her palette began to lighten up with both her oils and pastels.

Sadly, this story doesn't end well. Four years after Eva married Henri, she gave birth to a son, Jean Raymond Guerard. A few days later Manet died and while she was preparing comments for his funeral, she died of an embolism. Eva was only 34 years old.

My conclusion on this series
Well, there you have it: four outstanding Impressionists, mostly unknown because of their gender. I've learned a lot during this series, not only regarding the discrimination toward female artists (which really isn't that surprising), but also how these women approached the subject of gender in art. Not one of them represented women as sex objects but as individual people.

I'm glad I took the journey with these women and their contemporaries. I only hope they receive the recognition and appreciation they deserve. My optimism is high, considering Eva's La Demoiselle d’Honneur fetched so much.

Next will be a series on Expressionism.

Saturday, March 2
Colored Pencil
PCC/Sylvania campus 10 a.m. to 4 p.m.
Learn how to use colored pencil by building up layers until you reach a brilliant, colorful surface. Basic strokes and blending techniques on a variety of grounds will be covered. All supplies provided.
$20 materials fee.
Posted by Jill Jeffers Goodell at 2:59 PM 2 comments: