Who is Marie Bracquemond?

Ah, a new year. A brand new start. This past year I resolved to get rid of stuff from the house and studio, which I did. This year's resolution is to keep my calendar a bit more sane to give me more time to draw and paint my own projects. 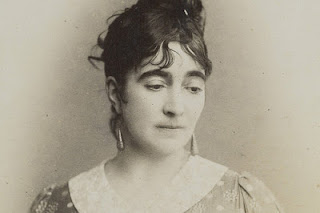 Speaking of painting, this month I'd like to discuss another Impressionist great, but who no one ever talks about:  Marie Bracquemond. So far, I have found it to be amazing that such talented women were historically ignored within the Impressionism movement.

Journalist, art critic and  historian, Gustave Geffroy,  referred to Marie Bracquemond as one of  les trois grande dames--the other two being Mary Cassatt and Bethe Morisot. Unfortunately, Marie's story is the most tragic in the end.

Marie began her life  in humble means near Quimper, Brittany, a town known for its artistic ceramics. I was there just two years ago and was very impressed with the work that is still done to this day (not outsourced to China--yet). But it wasn't in Quimper that Marie started her art career but in a town on the outskirts of Paris, where her family finally settled. She studied under an art restorer, M. Wassar and by the time she was 17, Marie was entering and exhibiting at the government run exhibit, The Salon.

Marie also studied under the famous artist,  Jean-Auguste Ingres  (1780- 1887) and was considered one of his most intelligent students. She began to receive commissions, one of which included the court: the Empress wanting a portrait of Cervantes while in prison, 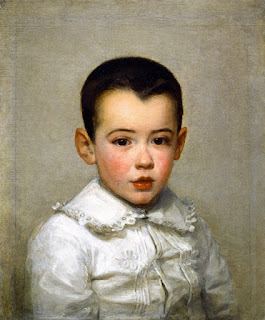 While at the Louvre, serving as a copyist, she met her future husband Felix Bracquemond. There were engaged for two years and them married in 1869. A year later she gave birth to their beloved son, Pierre.

Felix was and still is a well-known artist, specializing in etching, printing and decorative painting. In fact, he is more well known than Marie and wanted to keep it that way (more on that later). He became the artistic director of  Haviland, a company started by an American, which  became famous for their porcelain pieces. Although Marie wasn't interested in decorative painting or etching, she did produce some work with her husband. But her true love was painting.

Through her husband, Marie was introduced to the Impressionist group and she embraced their use of color, outdoor painting and large canvases. She participated in their independent exhibitions in 1879, 1880, 1886. Much of her color influence came from Gauguin. A few of her drawings were published in the French journal Modern Life in the late 1880's and she also exhibited her paintings in the Dudley Gallery in London. 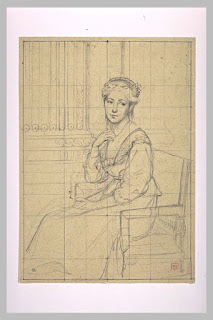 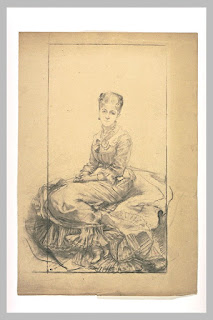 Except for the portrait shown above of her son, I was unable to find Marie's earliest works.  In the Louvre, they have several of her drawings(see above), which shows her excellent draftsmanship. The bulk of her work on the Internet is of her Impressionistic period with many painting done from her garden in Sèvres.

As I have discussed in classes and workshops, artists will often do studies before they paint their final. I was fortunate enough to find a study done by Marie of her painting,  Three Graces (also referred to as Three Women with Umbrellas). I love looking at studies and then seeing how the artist make changes. I like both versions actually,  but I have to say her final is much more delicate with its high influence of light.

So what happened to Marie? Why don't we ever hear about her and her accomplishments? Well, according to her son, Felix was rather jealous of her success. He was also an overbearing husband who didn't approve of her impressionistic methods. He badgered her so much that she finally gave up painting by 1890. She died in 1916, which means she didn't lift a paint brush again for 26 years.

I can't even imagine how she must have felt. That's why I say that she is the most tragic of the three female artists we have studied so far. Giving up painting for me would be like giving up breathing. It's so much a part of my life. What a sad ending.

Here are a couple more of her paintings:


Next month, I'll cover the life of Eva Gonzales, another Impressionist and student of Manet.

PCC Workshops: Sylvania Campus
Saturday, January 12 10 a.m. to 4 p.m.
Basic Drawing  $45
Afraid to draw? Here's your chance to learn how. If you can write your ABCs, I can teach you to draw within a couple of hours. It's a skill, plain and simple. Material fee: $20

Saturday, January 26Visual Journaling Mixed Media and Collage $45
New: Learn basics to Zentangle®
Journaling is a great way to express yourself. Come to this workshop with only your sketchbook. I supply everything else: paper, paints, pen and ink, glue, patterns and so much more. Material fee: $20

Posted by Jill Jeffers Goodell at 3:32 PM No comments: