For the next several issues, I'm going to share with you some incredible stories about five incredible women: Mary Cassatt, Berthe Morisot, Marie Bracquemond, Eva Gonzales and Camille Claudel.

These aren't your ordinary run-of-the-mill women, who accepted that their lives would be confined to getting married, teaching or being a servant.  Instead, all of them fought and said, "I want something more" to everyone—to loved ones, to schools, to society. Each one knew what she wanted and against all odds, went after her dream in the field of art.

It’s hard to imagine that there was a time when women were not allowed to attend art school. Although some American schools were progressive enough to allow women to enter their academies, they restricted females from taking life drawing classes with nude models (oo, la, la) and were only allowed to attend on days when the boys weren't on campus.

These women broke barriers unheard of, beginning in the mid-18th century. Their struggles were difficult at times and desperate at others. In those days, art was considered a hobby for women, not a career!!  All five of these women ended up in Paris where they were only able to take classes from private tutors and/or register as a copyist at the Louvre (see fig. 1). They were forbidden entrance into École des Beaux-Arts (School of Fine Arts). Nevertheless, they made a place for themselves.

Let’s begin with Mary Cassatt (1844-1926). She was born into an affluent Pennsylvanian family and at 15, entered the Pennsylvania Academy of Fine Art, where she studied throughout the Civil War years. Since instruction for females was so restrictive at the academy, she decided to move to Paris in order to study the masters to the chagrin of her father. Thus In 1866, with her mother  and other family members as chaperones, Cassatt settled in Paris, where she studied under a private tutor from the Academy, named Jean-Léon Gérôme.

Within two years Cassatt was admitted to the annual, government-run, Exhibition of the Works of Living Arts, or what is known as the Salon (see fig.2). This was a prestigious event for her. Not only was it difficult for most artists to be accepted, but even harder for women, who were represented by just over 10% of the exhibitors. One of the keys though to acceptance was to paint the way the jurors liked: historical or mythological subjects, conservative colors with little or no brush strokes. They must have liked what they saw because another work, Offering the Panal to the Bullfighter, was accepted in 1873, when she returned to Paris after visiting the U.S., Spain and other parts of France, along with working in Italy.

Then enters Edgar Degas (1834-1917)--a man she would befriend for the next forty years. Perhaps one could say, Cassatt's style changed upon their meeting (fig.3). She had admired his work for awhile, enamored by his use of rough strokes and color. There's even a story that says she used to push her nose against a storefront window to get a closer look at one of his paintings that was for sale.

From the start, Cassatt was highly influenced by Degas, eventually exhibiting with his fellow artists, the "Independents" or as we now know them today, the Impressionists. She was known for her mother and child paintings, although many critics couldn't get past the idea of the Madonna and Child, which she wasn't trying to portray. Instead, she, like the Impressionists, was painting people in everyday tasks.

Degas and Cassatt, although friends for almost a half-century, would experience a turbulent relationship. Some say they had a love affair, some deny it. Both never married, but from what I can I gather, Degas was, what we would say today, a chauvinist. In fact, later when Cassatt left the Independents to work on her new love of drypoint and printmaking, he said, "I am not willing to admit that a woman can draw that well."   In the end, she got back at him, by submitting some of his work, unbeknownst to him, into an exhibit in New York City to fund the suffragette movement.

Being a fiercely independent woman, Cassatt left the Impressionist group, and struck out on her own. She put her efforts toward teaching and advising her brother and others in the development of collecting art. After attending an exhibit in 1890 of over 700 Japanese prints in Paris, she began working a series of prints using Drypoint, a delicate form of printmaking (see fig.4)

Unfortunately, Mary suffered from diabetes and poor eyesight. Some say that she dabbled in pastels (see fig. 5) for years because it allowed her more freedom and compensated for her disability. However, during the last five years of life, she gave up painting altogether.

Through her continued efforts to promote the Impressionists' works and push for more exhibits in the U.S., I believe she could be called the Mother of American Impressionism. She has given us a legacy that few can match. No matter what the difficulty, she pushed forward.

There is a great clip from the movie Mary Cassatt: American Expressionist that you may want to check out.


Next month: Berthe Morisot
Posted by Jill Jeffers Goodell at 10:14 PM No comments:

Imagine this.  It’s 1912 and you’ve been told you have cataracts in both eyes. Doctors can surgically remove them, but it’s risky. In fact, one of your friends, another artist, has received the same news.  She eventually goes for cataract surgery and several treatments, but all fail. What would you do?

That’s the dilemma that Claude Monet (1840-1926) faced. Early in the 1900s, Monet noticed his eyes failing. Since he was experiencing the beginning of cataracts, his vision was probably a little bit blurrier and colors didn’t seem quite right. As one doctor has told me, cataracts are like looking through dirty lenses—you can see but it’s a struggle.

Ten years later Monet did have the feared surgery and successfully was able to see and paint until his death in 1926. He destroyed a lot the paintings he created before the surgery. But we do have some available. Below you will see the painting of the bridge at Giverney, his beloved home outside Paris, before his cataracts and after. 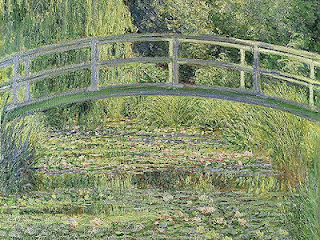 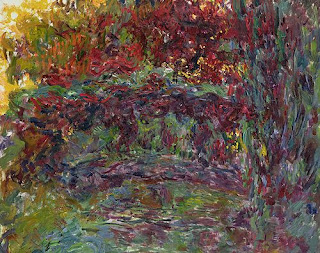 You can see what happened. He had difficulty seeing—thus the broad brush stroke and the reddish browns. Before surgery, Monet resorted to reading the labels on his paint tubes and memorizing where the colors were placed on his palette. It didn’t seem to work. After surgery he was able to see like never before and some say he even saw in ultra-violet.

Mary Cassatt was diagnosed with cataracts the same year as Monet and went on to have surgery and several treatments, which eventually left her blind. Her diabetes probably didn’t help either. She switched from oil painting to pastels, as her friend Degas did, because it allowed for rougher lines and expression. In the paintings below, you can see the difference between the paintings Cassatt did before being affected by cataracts and then after. 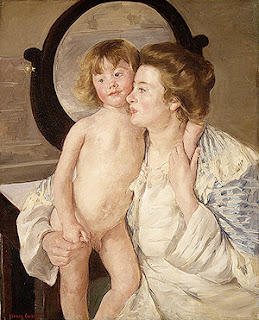 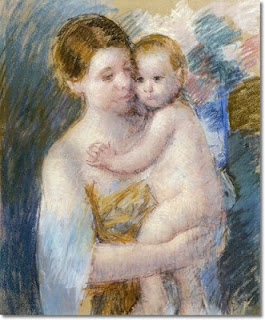 Degas started to experience problems after serving in the Franco-Prussian war. A victim of a retinal disease, Degas eyesight continued to decrease throughout the next 30 odd years. You can also see the difference in his paintings as his disease progressed. 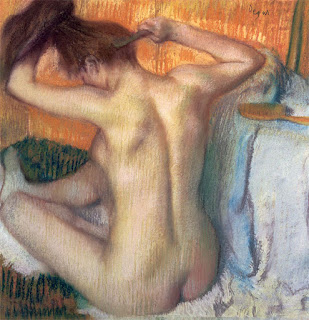 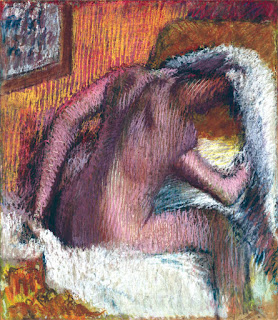 Camille Pissarro suffered chronic infection of the tear sac in his right eye and had a very hard time painting en plein air (outside). Many of his later cityscapes were painted behind windows.

I find this subject of interest right now as I’m going to have cataract surgery myself. I’ve been told that it may have been caused by the steroids and chemo I had or just aging itself. The longer we live, the more likely we will have eye trouble. In the case of Monet and Cassatt, they both lived into their 80s. Although this age may not seem too outlandish today, back then when the life expectancy was far lower, this age was amazing. So it’s not that surprising, they fell victim to problems with eyesight. Today we are so lucky because as we age, cataract surgery has been refined and it's success rate is stunningly high.
Posted by Jill Jeffers Goodell at 7:55 PM No comments: