What's age got to do with it?

I started my advertising and public relations career at 18 years old. I attended college in the mornings and worked part-time in an ad department for a supermarket. My dad got me the job. I was rather lucky. How many kids get that type of opportunity so young? It was a good fit as I’d always been creative. So I learned the ropes from the bottom (believe me, the very bottom) and learned my future craft.

I'd say it was a good career for me. However, the best part of my life is right now. Painting, drawing, writing and teaching. I love it. I am definitely the person I should have always been. I’m just grateful I didn’t have to wait until I was 76 years old, like Anna Mary Robertson Moses, aka Grandma Moses. But hey, it’s never too late.

Aging is an extraordinary process
where you become the person
you always should have been. David Bowie

A late-bloomer who just liked to paint.
Born a year before the Civil War began in upper state New York, Anna came from modest means. She was the third child of 10, and at age 12 left home to work as a hired girl in a nearby farm for 15 years. At 27, she married Thomas Salmon Moses, both relocating to Shenandoah Valley in Virginia. They had 10 children, five that survived. In 1905 she returned to New York. 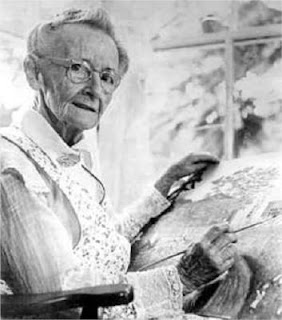 Okay, enough of the dates and stats. Now for the interesting part of her story.  Anna had always dabbled in art. As a young girl she would use lemons and grapes to color her pictures. She usually drew from memory and used only the materials at hand such as house paint. To pass the time away, she embroidered, until her arthritis was so bad, she had to stop. That’s when her sister, Celestia suggested that she start to paint. That was the beginning of a whole new world for Anna, although she just considered it something to do.

Be it raising cows or children, embroidery, painting, Anna wanted to keep busy. She wasn’t career-minded. She was simply living a life that was enriched by her painting. By the way, she did enter her paintings, along with baked good and preserves, at the county fair. But only won prizes for her food. The paintings were ignored.

Hanging your work in a drug store can work.
Then, Anna happened to hang her pictures in a nearby drug store, which was common even when I was a kid. I remember local artists’ works hanging in the post office and several coffee shops. I always wondered if anyone ever bought them.
In Anna's case, it worked. One day an art collector, Louis Caldor, walked past the store, noticing the paintings in the window. He went inside and bought all of them, which were going for $3-$5 each.

Within one year, she was exhibiting at the Metropolitan Museum of Modern Art in the show ”Contemporary Unknown American Painters.” Eventually, she became so popular that her future exhibits drew record-breaking crowds. Anna’s work was often used to promote the holidays in the 40s and 50s. In 1947, Hallmark sold 16 million cards with her art splashed on the front covers. 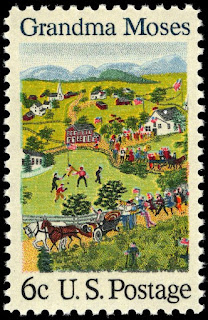 Speaking of covers, Anna also appeared on the front cover of Time magazine when she was 93 and received two honorary doctorate degrees. Those $3-5 paintings are now selling in the millions. In particular, her Sugaring Off painting was sold in 2006 for $1.2 million. Not bad for someone who couldn’t even sell one picture at a county fair. Even the post office got into the act with one of her paintings.

Age doesn’t matter.
So what does this tell me? Of course, we’re never too old to start something new.  Age is only in our minds. I met a woman once who told me she was too old to learn something new. She was 52. I thought that was incredulous thinking. Today, I suspect it’s more societal thinking. We are obsessed with youth to a point where we think only the young can create fresh new ideas. That’s simply bunk. Perhaps this thought process comes from the glorification of the high tech industry that is famous for young entrepreneurs starting companies (i.e., Bill Gates at 23 and  Steve Jobs at 21).

In fact when I was researching for this article, I searched under “late bloomers.” I was rather surprised to see that many people were listed as young as 32 to 41. What? If these folks are considered late bloomers then no wonder someone would think 52 is too old to learn. In all fairness, there were a lot of people I found who are above 60, but many were listed in their 40s.

You are never too old to set
another goal or
to dream a new dream. CS Lewis

Yes, I agree, no matter what age you are, you can learn something new or set a new goal for yourself. I have students who are in their twenties all the way up to their eighties. If I see any difference between the young and the “old,” it is that the latter is more conscientious, more deliberate, more open to learning new ways.

So my point—don’t let age stop you from being the person who ought to be. Grab your passion and run with it as long as you can!

Getting older is an adventure,
not a problem. Betty Freidman 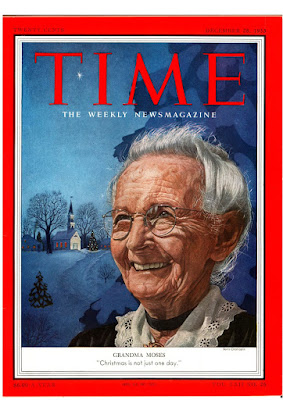 An interesting fact about Grand Moses:
When her arthritis got worse in her right hand,
she taught herself how to paint with left.
Now that's tenacity!
Read more »
Posted by Jill Jeffers Goodell at 3:00 PM No comments: