Is Tracing Ever a Good Idea—It depends. November 2014 Newsletter

Download entire article in PDF
I've been reading about American illustrators recently. While the Impressionists and post-Impressionists were making headlines in France (and later in the U.S.), there was something equally exciting going on here in the States. It was called the Golden Age of Illustration, although at the time it wasn't called that. Instead it was a boon for illustrations in books and magazines in order to meet the “new” mass circulation. The whole concept was brought on because of the advancement of high-speed presses, cheaper papers and photographic innovations, including line-engraving and half-tones. And the best news of all was that publishers were willing to pay more for illustrations.

It’s interesting to note that fine art and illustration were not considered separate entities back then. An illustrator who created for a magazine, such as Winslow Homer for Harper’s Weekly, was considered the same type of artist as an easel artist. It wasn't until the next century in the 20s and 30s that a schism occurred.  Illustrators became commercial artists and easel painters were considered the fine art artists. I’ll be covering more on this topic in another post.

What intrigued me about the artists of the 1850s and onward was how they embraced the camera. Many of them considered it just another tool and many used the new invention here in the States as well as in Europe. Here’s a short list with some examples below:

In later years, illustrators would welcome photography as a tool even more with Norman Rockwell leading the way serving as a director in his photo shoots and then tracing the photograph to create his paintings.

Why trace when you can certainly draw?
I spoke with an illustrator not long ago and posed the same question. He is an excellent artist who could draw circles around what I do—in his sleep. So why trace? He said it succinctly, “Time is money.” When you are under a deadline like so many of these illustrators are, they really don’t have time or even the money to hire a professional model and spend hours putting down on canvas what can be translated from a photograph in a matter of minutes. Rockwell used to hire neighborhood kids, neighbors and friends to pose for him. What’s more, if you want expression (like a goofy or surprised face) or a running/walking motion, an artist can’t expect the model to hold the contortion for an hour or two. It’s difficult. Notice that art before the camera isn’t quite as action-packed as illustrations or comics are today.

Tracing is the easy part, finishing the project is harder than you think
Years ago I was in a painting class that everyone projected their photos onto watercolor paper. I never used it because I was a “purist.” Okay, I was stuffy. I wanted my paintings to be fresh from my hand, not stilted from a camera. I continue to believe that if not done properly and with a good drawing ability, paintings created from tracing do look somewhat off. But that’s the key—the ability to draw. I can look at a Rockwell painting and even with the knowledge it’s been traced, I’m still awe struck.

Take for instance, The Perfect Prom Date, listed below. Yes it was all staged by Rockwell, but if you look closely at the end result, he’s added his own style, more props, more people and certainly his own color. All his photos were done in black and white. Moreover the people are not exactly the same in the photo as in the painting. Rockwell had this incredible talent for drawing the same subject three or four times and each would look like a different person. 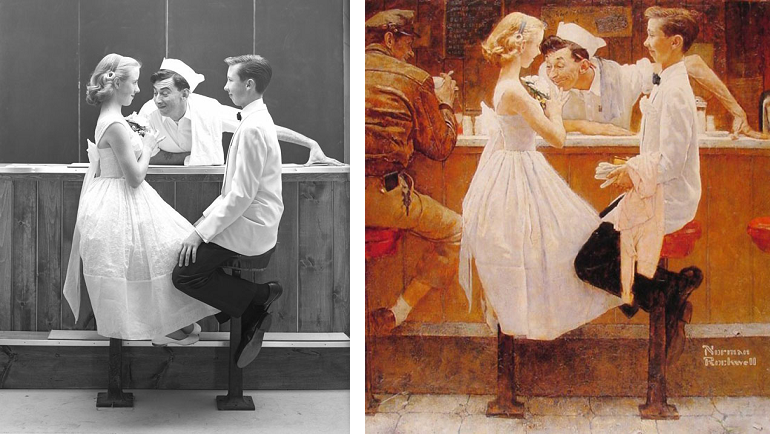 After reading about how these illustrators used photography to aid them (yes, I've used reference photos for years), I pulled out my handy Pico projector and decided to do some tracing myself. Fortunately, my Pico is a hand-held projector so I didn't have too much to do to get the project going. I plugged in a photo of Bette Davis and traced it onto some drawing paper. I was astonished at how hard it was to add the values and all the detail after tracing. Below is the photo and the drawing. Half of it is the traced side; the other is the “drawing.” I added the darker lines so that you can see the outline.

It was harder than I thought and this was just a 15-minute study. All I really had were the lines, the outline of the face. I had to put in the rest. As you can see, I still have a long way to go in order to capture Bette in the drawing. I’m just amazed that Rockwell was able to put color to this as well. 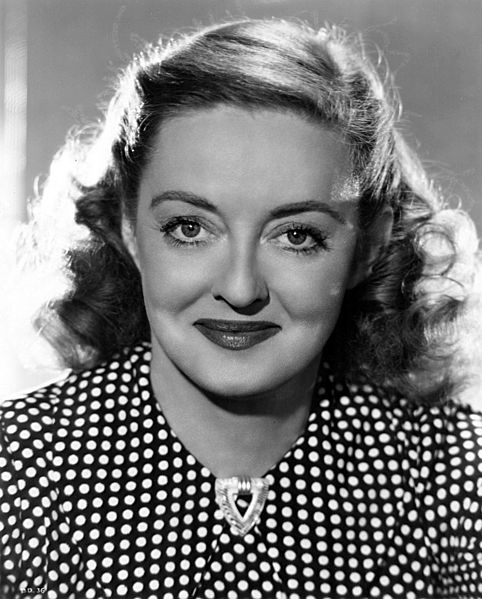 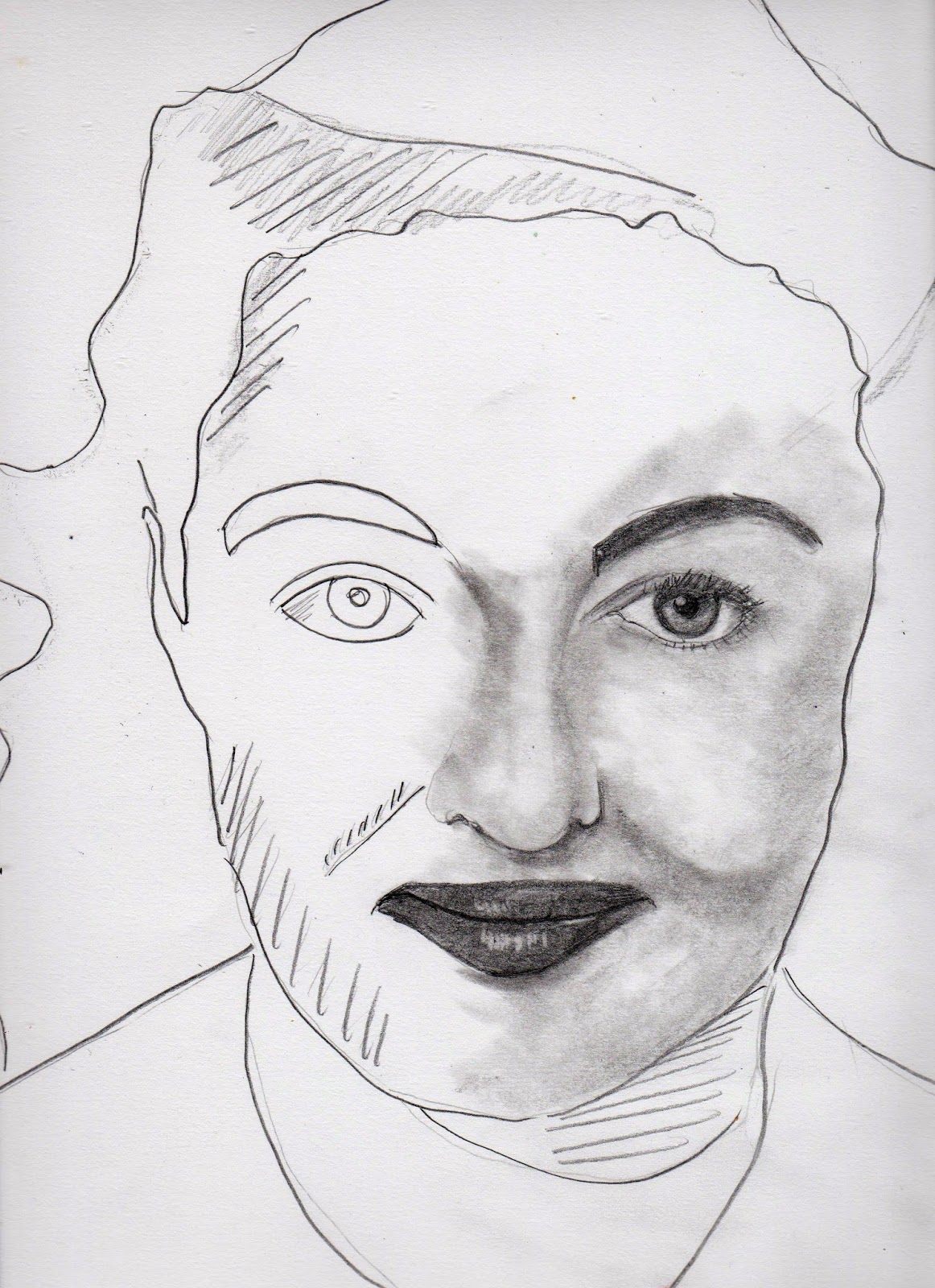 “Chapter XXIII
How you may obtain the essence of a good figure or drawing the tracing paper.
You should be aware that there is also a paper known as tracing paper which may be very useful to you. To copy a head, or a figure, or a half figure, you can find it attractive, by the hand of the great masters, and to get the outlines right, from paper, panel or wall, which you want to take right off, put this tracing paper over the figure or drawing, fastening it nicely at the four corners with a little red or green wax…. Then take either a pet cut quite fine or a fine brush…and you may process to pick out with the ink the outlines and accents of the drawing underneath….”

Author and painter Gregory Manchess wrote the article, 10 Things to Remember…About Tracing, where he explores the different things you can learn by using tracing paper. One point he makes is tracing a foreshortened object, such a flower or finger. It’s one of the hardest things to capture in drawing and/or painting. But if you take a piece of vellum and trace the object, it helps to see the problem. Sometimes we have to do things to help us really see. Three other points he made that ring true to me:

It helps the memory. About a year ago, I included a video in one of my posts where we saw how John Ruskin used tracing to see how far off he was when drawing a leaf. The same is true for helping you to memorize, such as in anatomy.  If I go over the same object many times, I don’t need to trace it anymore. My muscle memory takes over.

Draw for shape, not detail. As much as I can see with my projector, I found that just including the lines and shapes were much easier and gave me more liberty to finish the drawing in my style—not the camera’s.

Use it as a guide. When tracing Bette above, I again kept my tracing simple, as a guide to help me with the subtle facial positioning.

I know you are probably wondering if I’m smoking something these days (I’m not). How can I back up tracing? Like I said in the title, it depends. That is, it depends on the project at hand, is it a commission that must be perfect, is it a learning possibility, is it a way to see something you haven’t seen before or is it because you just don’t want to be bothered learning to draw. Of course, the latter doesn’t help you that much. It’s better to come to one my classes or workshops to learn how to draw and use tracing to help you perfect it (okay, I couldn't resist that one itsy-bitsy commercial).

For the next few months I am going to be covering the lives and art of American artists, beginning with more on Norman Rockwell. It seems we never spend enough time learning about our own.

Posted by Jill Jeffers Goodell at 11:06 AM No comments: