During our last session in my studio acrylics class, we studied Vincent Van Gogh, trying to copy the various styles he used during his life.  What an amazing artist, one whom I really didn't like in my early days. But as I've grown older (let’s not talk about how much older), I have come to appreciate and even love his free use of brushstroke and inviting composition.


Born in 1853 into a modest minister’s home, Van Gogh (pronounced van GOH in the States, van GOFF in Britain and vun KHOKH in   the Netherlands*) was tormented most of his life. As a young child, he enjoyed sketching, drawing and wandering around the small village of Zundert in search of all things natural. But even in his youth, the seeds of discontentment and anger were planted. So much so his parents felt forced to send him to private school just to save peace at home.

Van Gogh’s first job came about through family connections in The Hague at the art dealership, Goupil & Cie. He did well in the beginning but grew disgruntled in time and was transferred to the company’s London location. At first, Van Gogh succeeded in England, even making more money than his father, only to fall eventually into his familiar depression and frustration. After being transferred back and forth to Paris and London, he was finally terminated and returned home. 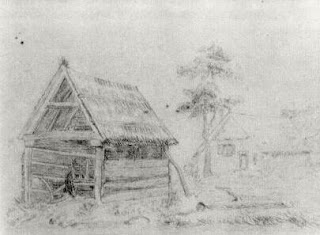 In 1879, after failing to enter the ministry, he took a temporary job as missionary to the coal miners in Petit Wasmes, Belgium but was dismissed because he decided to live like a miner, including sleeping on hay in a small hut. According to the church leaders, Vincent was  "undermining the dignity of the priesthood."

A year later he returned to the same area in the village of Cuesmes, where he started to draw seriously. So much so that he began to feel that perhaps art was his answer. Eventually, he attended Académie Royale des Beaux-Arts in Brussels to learn perspective and anatomy.

1880: the beginning of the end.
With his brother Theo’s financial help, Vincent began his 10-year journey in the world of art. During the next five years, though
tumultuous, he learned and developed his skills to be an artist. Then in May of 1885 after working on sketches and many false starts, Vincent finished his first great work: The Potato Eaters.

Upon completion he wrote Theo, "You see, I really have wanted to make it so that people get the
idea that these folk, who are eating their potatoes by the light of their little lamp, have tilled the earth themselves with these hands they are putting in the dish, and so it speaks of manual labor and — that they have thus honestly earned their food. I wanted it to give the idea of a wholly different way of life from ours — civilized people. So I certainly don’t want everyone just to admire it or approve of it without knowing why."

To put this in perspective, Vincent only had five more years of his incredible life left. In that short bit of time, he created nearly 900 paintings! It’s a shame he took so long to discover his destiny, which would eventually play a dirty trick on him.

In any event, Vincent  eventually moved to Paris, met and learned 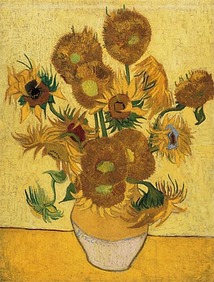 from the Impressionists and Post-Impressionists. Then off to Arles, France, where he hoped to establish an artist cooperative, inviting Paul Gauguin to stay with him. He was rather excited about his visitor, even decorating Gauguin’s room with his someday-to-be-famous paintings of sunflower still lifes.

It is in Arles that Van Gogh finally began to develop his own unique style. Influenced in Paris by bright color, broken brush strokes and common subject matter, he embarked on his own road, filled with the Provencal sun, expressed in calligraphic lines that dance with brush in hand. Everything and everyone was paintable:  the flowers in the field, the night café, the bedroom and so much more. 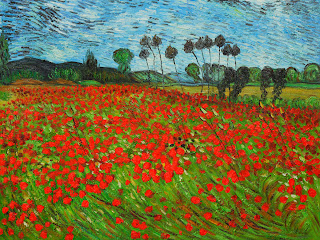 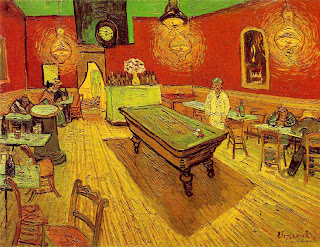 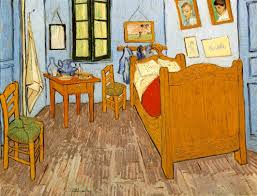 Gauguin showed up in 1888, and for nine weeks things seemed to go well but in the end, tensions grew.  After being threatened by Van Gogh with a razor, Gaugin left. It appears that’s when Vincent loped off part of his ear and ended up in hospital until January of the following year. 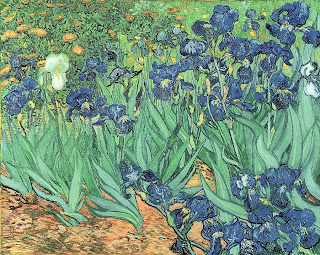 While Van Gogh was definitely disturbed with depression throughout his life, he seemed to be dangerously affected after his hospitalization in Arles. There are lots of theories.  He did have a tendency to suck on his paint brushes, leaving some to think he had lead poisoning. He suffered from seizures, attributed to epilepsy and aggravated by the toxic use of the drink, absinthe. Some believe that his wide emotional swings were an indication of bipolar disorder, then some say he was suffering from syphilis.

Interestingly, these last two years of his life are known to be his best painting years. In spring of 1889 Vincent admitted himself to a psychiatric hospital in Saint-Remy about 15 miles away, where he set up a small studio and produced 150 paintings, all done in one year!

In spring of 1890, he left Saint-Remy for Auvers-sur-Oise, near Paris and was under the care of Dr. Paul Gachet, a homeopathic physician. Gachet, who was an amateur painter himself and a massive collector of Impressionist work, also treated other greats such as Pissarro, Renoir, Manet and Cezanne. He was later criticized for not helping Van Gogh more, but his hands seemed to be tied as Vincent would not follow orders about drinking to excess. 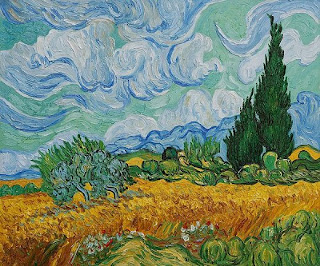 One day in July, some say he was despondent over Theo’s claim that he could not financially support him anymore. Vincent went into a field and shot himself. He died two days later.

Alternative ending
Authors,  Steven Naifeh and Gregory White Smith argue that Vincent may been murdered in their new book, Vincent, The Life. Instead of suicide, they believe he was killed by kids who often taunted him in the village. Here are few clues that make their case:

What made Van Gogh so different to a point where he indeed changed the way art was created and viewed? I think his brush strokes and calligraphic lines were his biggest contribution, along with his use of color and drama (compare his early work to his last to see the difference). But most importantly, he gave us the courage to go outside our comfort zone to express ourselves.

Every Tuesday evening    7 pm to 9  pm
Drawing from the backyard
Using  pen and ink with watercolor wash, we will begin a nature journal to be used all summer long to capture the natural world around us, beginning  with our backyard. Plants, small animals, flowers. $70

Every Wednesday morning:  Sketch’n on the Go!™ 10 am to 12 pm Nature Sketching
Come learn how to create a nature sketching journal. First class we will dissect a flower and record what we see. The rest of the session we’ll learn more about sketching insects to birds of prey.  $70

Saturday April 6    Basic Drawing One-Day Workshop
PCC/Sylvania campus 10 a.m. to 4 p.m.
If you can print your ABCs, you can learn to draw! Learn basics with practical examples and constructive exercises. Covers line, shape and form, including perspective. Bring 90# or heavier, spiral sketchbook; all other supplies provided. Material fee $20

Posted by Jill Jeffers Goodell at 3:31 PM No comments:

I love reading history. I enjoy learning how we, as humans, venture from one challenge to the next. So while I was reading about Expressionism for this newsletter, I realized that this art form (which is  mostly non-objective and comes from the artist's expression of herself), could not be discussed without some background.

While some would say that modern art has its germination in the post-impressionist era (1880s to 1890s), I believe the earliest seeds began in the mid-1800s with the Impressionists. That's because they bucked the system. They said no to the traditional and struck out on their own, creating an art movement. What made them stand out from the rest?

Of course some of these techniques were used by others in the past but no one used them as much or as well as the Impressionists. They worked together to paint an impression of what they saw, not historical or mythological stories.

Since the paint tube had been invented, they were able to go outside and paint nature in its purest sense. Their canvases danced with glorious colors and light sometimes with less regard to the subject or form in front of them.

While all, but Van Gogh, exhibited with the Impressionists, and their original work stems from an impressionist style, the post-impressionists began to melt away, seeing limitations to the approach, especially on an expressive level. Additionally, they usually worked alone, became more interested in structure, the modeling (form) of a shape and symbolic content. Spontaneity outdoors was replaced with long hours in the studio. Painting with others was replaced with solitude. The inner life of the individual artist begins to appear on the canvas.

Paul Cézanne
Considered the father of modern art, Cézanne struggled with painting. It just didn't come easy. I think also he was trying to go in a different direction than his impressionist friends, which didn't help. He worked at it and worked at it, sometimes getting so frustrated, he'd say,"Painting is damned difficult - you always think you've got it, but you haven't." He was also a slow painter, so much so, his fruit would often rot before he finished his still life.

Cézanne was well known for building form with color and his analytical approach to painting, once saying, "One must first of all study geometric forms: the cone, the cube, the cylinder, the sphere." His work later inspired Fauvist (Mattisse) and Cubist (Picasso).

Notice the painting below painted in 1877, entitled, Still Life with Jar, Cup, and Apples. Cézanne begins to work on the form of his apples with graduation of values.


Thirteen years later in 1890, Cézanne has develop a much better sense of form and structure in his painting, as evidenced in Still Life with Apples and a Pot of Primroses. 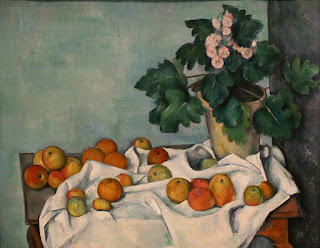 Cézanne would often paint still life in the morning and spend his afternoons out-of-doors. To see more of Paul Cézanne's work, go to: http://commons.wikimedia.org/wiki/Paul_C%C3%A9zanne. Look for what Picasso said, "He was the father of us all."

In subsequent months I will continue our study on the roots of modern art with next month covering Vincent Van Gogh.

Journaling is a great way to express yourself. Come to this workshop with only your sketchbook. I supply everything else: paper, paints, pen and ink, glue, patterns and so much more. Material fee: $20

Posted by Jill Jeffers Goodell at 8:25 PM No comments: