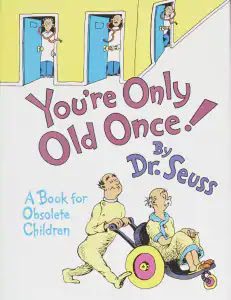 You're Only Old Once!
by Dr. Seuss

The Day the Giggles Died
I remember the day I learned about the passing of Theodor Seuss Geisel (1904-1991) or Dr. Seuss. My son, who was only two, and I were at an ice cream shop. I was truly taken aback. While I never read Dr. Seuss as a child, I had read most of his children's books to our son. Wow, what entertaining readings they were.

For years, I thought Seuss had only written the words and commissioned the drawings. Then, I learned he was the master of all the books. Interestingly, his past foretold his future. As a young child his mother would speak to him in rhyme, a wonderful way to learn poetic meter. ll. 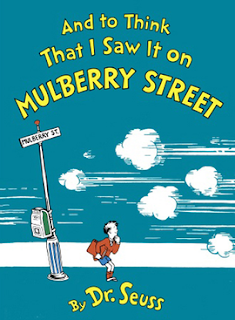 Obviously, he was a good student, attending Dartmouth and then going to Oxford to study English Literature. His plan was to get a PhD. But while attending, he met his future first wife, Helen Palmer, who examined his "notebooks." They were filled with scribbling and doodling. Palmer saw that he had a passion not only in writing but perhaps more so in drawing. That's when she encouraged him to drop the literature route and go for his art.

Fortunately, back in the States he landed assignments with Vanity Fair. Life, Saturday Evening Post and eventually with the advertising agency, McCann Erickson. After a somewhat lucrative career as a cartoonist, Seuss wrote and illustrated his first children's book, And to Think That I Saw It on Mulberry Street, inspired by the rhythmic sound of a ship's engine.

As with so many authors' stories, the book was rejected 27 times. Seuss was so disappointed, he decided to go home and destroy everything. On his way, he met up with a long time friend from Dartmouth, who by chance, had just recently been hired by Vanguard Press in their children's department. And well, the rest is history. The book was published in 1937. Just think about what would have happened if he had passed by a hour later or earlier, or walked on the other side  of the street.

While we know Seuss as a famous author, he did far more. Before and during WWII, he created political cartoons. I had never heard of America First until recent times, but there was such a named movement before the war. They were isolationists who did not want to participate in any European conflicts. Obviously Seuss did not think kindly of these people as the following cartoons demonstrate: 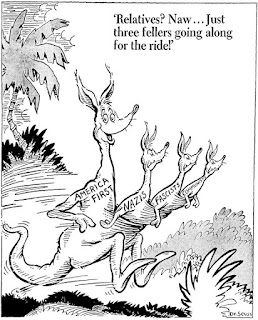 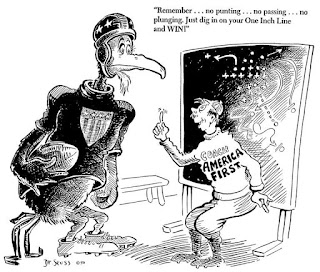 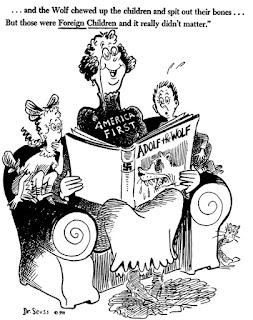 Seuss joined the Army as a captain and headed up the Animation Department of the Air Force's motion picture unit. Near the end of the war, he and Frank Capra (It' a Wonderful Life producer), created two short films:  Your Job in Germany and Our Job in Japan, both to prepare our troops for occupation. Notably General MacArthur thought the Japanese film was too lenient and barred it. Of course, when watching these films, we all have to consider the time frame in which they were made.

After the war, Seuss and his wife moved to La Jolla, California, and he continued writing his children's books. In 1954 he was approached to help with school literacy, noting that most books being produce then were considered boring to most kids. Ellsworth Spaulding  director of the education division for Houghton Mifflin, asked Seuss to write a book that included 250 words most first graders should learn. Thus the birth of the Cat in the Hat.

In total, Dr. Seuss created at least 42 books. Along with his cartoons and books, he also was a prolific artist. See the link here. He passed away in September 1991 of oral cancer. He is still very missed.

“Today you are You, that is truer than true. 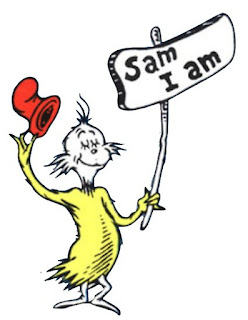 There is no one alive who is Youer than You.”

Classes begin second week of January. Come join the fun, while learning how to draw and/or paint in the Glastonbury Studios classes. To sign up for classes in my studio, please email me at jjgoodell@gmail.com. Five-week term; limited to six students per class. Only registration and payment secures your seat.

The Morning Draw
We will be exploring a variety of subjects and drawing techniques. Limited supply list.
Every Wednesday morning
10 am to 12:30 pm
$80 per five-week term
Sign up for wait list


Glastonbury Studios One-Day Workshops
All studio workshops are from 10 a.m. to 4 p.m. Includes most supplies and lunch. Sign up early. Most workshops fill up quickly.The cost is $90. Class size is limited to ten students. Pre-registration is required. Only payment reserves your seat. 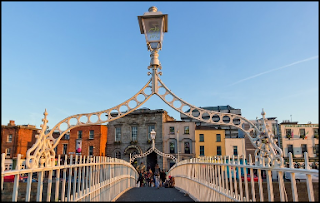 Posted by Jill Jeffers Goodell at 5:17 PM No comments: