Colors. They're fun. They're vibrant. They enrich our lives.  I was just thinking about how much our lives have changed for those of us who were brought up during the mid-20th century. It's hard to imagine that once upon a time we watched television in black and white--no color, no HD, and with only three channels. How dull can you get? (Although lots of us thought it was cool then!) Today, we're watching the same “concept,” with drama flowing from a thin rectangle hung on  a wall, in full-brilliant color and high-definition.  Just see how uninspiring this black and white ad is for Bewitched.

Years later when color television came along, a similar scene, in full color, was far more interesting. This was revolutionary at the time. That's what color does. 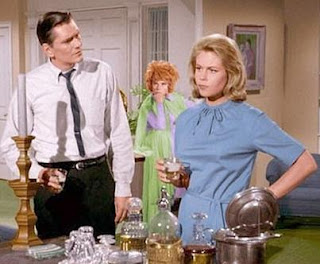 Last month I covered the primary colors: yellow, red and blue. From these three we can create lots and lots of colors (even a million). But for now, I just want to talk about the three naturals, orange, green and violet or what's called the secondary colors.

Creating a secondary color starts with one primary, which you add to another primary, thus making a new secondary one.  It goes like this: 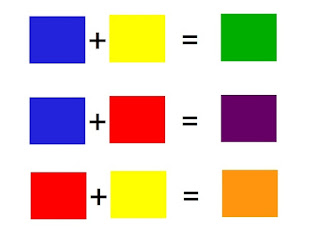 With both the primary and secondary colors, you can create almost anything you want. Except perhaps for color pencil and pastels, you really don't need to buy all those endless colors from paint manufacturers (oh shucks!) to create a painting. It's just a matter of mixing the right color. And as with everything else, it's just a matter of practice.

Below, I've created a color wheel that includes something called complementary colors. These are the colors that are opposite each other on the color wheel. While we may think that these colors “complement” each other, they actually complete each other, creating some of the most beautiful grays and browns when mixed. 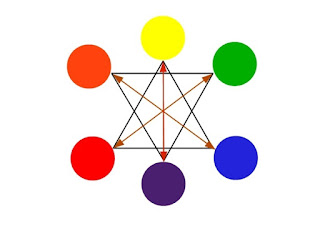 Complementary colors are also rather striking in a picture―be it a painting or photo. 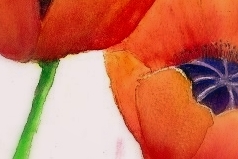 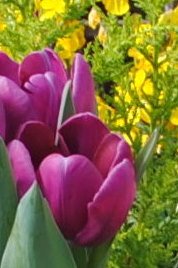 Try it tonight!
Why not pull out some watercolor paints tonight, select only primary and secondary colors and start mixing away. First mix some secondaries, then see what happens when you mix the complementaries together.

Posted by Jill Jeffers Goodell at 12:10 PM No comments:

As we all learned in elementary school, there are three primary colors: red, yellow and blue. Traditionally, we’ve also been told that yellows and reds are warm, while blues are cool.  But like everything in the study of art, it’s not that simple. Let me explain.
When I started to mix colors seriously, I had such a hard time. Nothing seemed to work. I’d try to mix my blue and yellow and I’d get a sick green. My blues and reds were a very anemic violet—more like a cinnamon. It wasn’t until I learned about color temperature that things improved.
What I didn’t understand was that the three primary colors have cool and warm attributes, depending on the pigment you choose. Mixing warm colors with warm colors and vice versa, really helps. Look at the colors below and hopefully you will see variations in temperature. They're primary colors, but distantly different. One may lean towards a red (warm), while another may lean towards a blue/green (cold).

Yellow: Lemon yellow and cadmium yellow
Blue: Ultramarine and cobalt blue
Red: Cadmium red and alizarin red
Source of colors: Pigments through the Ages.
Sometimes it's easier to understand color temperature by looking at paintings directly. Here are two examples of cool and warm paintings. Can pick which one is which? 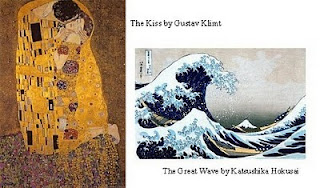 When mixing colors, you can create new warm colors by combining two warms. Conversely the cooler colors (and paintings) can be made stronger by mixing cool with cool. However, the real fun and perhaps certain frustration begin when you play with mixing cools and warms. If you want to play with this more, you can find the colors listed above at many art stores. Try mixing them first-hand. I can guarantee you’ll learn a lot and have fun too boot. Want to learn more about pigments, then go to: http://www.webexhibits.org/pigments/
Next month, we’ll talk more about secondary colors.
Posted by Jill Jeffers Goodell at 12:21 PM No comments: