As I write this newsletter I am at the Sitka Art & Ecology Center on the Coast. I’ve been here teaching drawing, sketching and painting for about a week. It’s been a wonderful time—even with all the misty rain. But alas, I’m headed back to the Portland area tomorrow—a mixed bag of emotions. I miss my home, studio and dog, but oh boy, it’s so beautiful here.

Onto the subject at hand...This month I’m covering the pigments black and white. Of course they both have a wonderful deep history.  Let’s begin with black.

The versatility of black
Back in the mid and late 1800s, the Impressionists changed the world with their canvases dancing with brilliant colors. Black seemed to take a back seat.  Many of the Impressionists simply dropped the color from their palette.

There’s a story that John Singer Sargent and Claude Monet were out painting one day when Sargent  asked if he could use some of Monet’s black. Whereupon, Monet announced that he didn’t use black. "In nature all colors are made by mixing."

This idea of excluding black caught on and to this day there are people who refuse to use the color straight from the tube, instead opting to make their own black by mixing reds, greens and browns. See my article dated, January 2012 below on mixing chromatic blacks.

Interestingly, one Impressionist, Renoir, did hold out and used black. In fact, there’s another story that tells of a group of young artists announcing to Renoir that they had dumped all their tubes of black paint into the Seine River. He replied with surprise, “But black is a very important color, perhaps the most important."

As we can see in his painting, La Loge, he used black in the opera viewer’s  dress, while enhancing the white with dashes of blues, pinks and yellows.

The Impressionists were really saying that the traditional method of always putting brown or black in shadows was not acceptable for them. Instead they saw color in the shadow. I agree, but I disagree with eliminating the color from one’s palette because there is more to black than meets the eye.

Generally black is made from either mineral, plant or animal stuff. The first black was pulled from the fire by early artists—charcoal either created from wood or bones that were burned and charred.There are four popular blacks: Ivory, Lamp, Mars and Payne’s Gray.

Ivory or Bone black, which was a favorite of Rembrandt, is created by carbonizing bone. As far back as 4th century BC, the color was referred to as Elephantium black because it came from elephant tusks, a practice that stopped in 1929. From the early days, the tusk chips were put in clay urns and fired until all that was left was black “dust.”  It’s very opaque and intense—a little goes a long way. With a brownish undertone, Ivory makes warm grays when added to white (to make a tint).

Lamp black comes from the soot collected by the burning of gas or oil—particularly in the past it came from gas lamps. This all-purpose black has a bluish influence and is transparent. When added to white (tint), it creates wonderful  cool grays.

Mars black is artificially made from iron oxide. It has three times the strength of all the others, dries quickly and is warm. I personally like Mars the most.

Payne’s Gray, although not a true black, is very cool in temperature and also goes a long way. In watercolor, especially where you don’t use white, this pigment is great for creating grayish tints. You can make it yourself with Mars black and Ultramarine blue. Try it, it’s fun!

On the lighter side
On the opposite side is white. As said above, white isn’t usually used in watercolor as the artist instead opts to leave the paper to represent the highlight. But in oils, acrylics, colored pencil and/or pastels white is used. Historically, White Lead was used from the earliest times, dating back to ancient China. However, it’s poisonous and is not used any longer.  Today, there are three popular whites used: Titanium, Zinc and Chinese.

Titanium white is made from titanium dioxide. The pigment has been in use since 1916 when it was used for industrial purposes. About five years later it found its way onto the artists’ palette. Titanium is bright, warm, densely opaque. It lies in between lead white and zinc white (see below).

Zinc white is made from zinc oxide, the same stuff we use for medicinal purposes. Created to replace the deadlier White Lead in the 18th century, the paint is heavier than its predecessor, less pliant and can cause cracks in oil paintings. It is cool, clean white and somewhat opaque.

Chinese white was invented by Winsor & Newton. Here is the story from their website:

At the very beginning of their partnership, Winsor and Newton determined to improve artists’ pigments and zinc oxide was an enormous success, the first alternative to lead white.

Winsor and Newton heated zinc oxide to very high temperatures in [their] ovens and produced what they called Chinese White; at last an alternative white with good opacity.... Chinese White was introduced in 1834 having been tested by Sir Michael Faraday, a pre-eminent scientist of his day.

Usually offered in watercolor and gouache kits, Chinese white is somewhat less opaque than Titanium and is very brilliant. I use it in ink work on occasion, especially to cover up a mistake (Liquid Paper works well too).

Next month I will explore how to make greens. Now that we are in the summer months, it would be nice to know what combinations of paints one can use to create the different tonal values of green. And remember, blue and yellow aren’t the only colors to make green. Yellow and black make a wonderful olive green. Learn more next month!

What's Up for Summer! 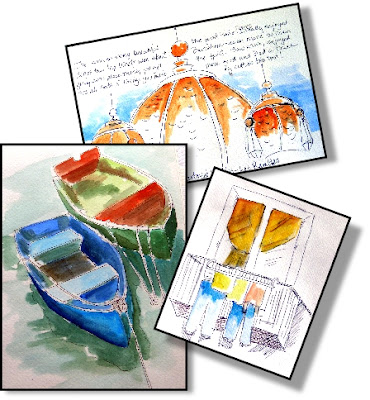 To pre-register or receive more information
on Glastonbury Studios classes, please contact me at:
jjgoodell@gmail.com or call me at 503.524.6981
2nd Sundays Visual Journaling Class
Glastonbury Studios in Tigard
1 p.m. to 4 p.m.
Starts this Sunday, July 8th
$20 drop in fee. $100 for entire six weeks (make up are available)
Here’s a chance to journal with words, collage, paint and found items. Just bring your spiral sketchbook and I’ll provide the rest!

FREE!
Travel Sketching Demo at Dick Blick, Beaverton
Friday, July 13th  2 p.m. to 4 p.m.
Come join me while I demonstrate techniques to travel sketching at Dick Blick. I'll cover the materials you should bring to the basics to sketching with watercolor and ink! It's all free! What a deal. Phone number to Beaverton store: (503) 646-9347

Posted by Jill Jeffers Goodell at 1:28 PM No comments: