A deadly twist
Usually,  when you read about earth pigments, you learn about how they date back thousands of years, first coming from clays and soils and used in ancient caves by early man. But I bet you’ve never heard about an earth pigment manufactured straight from the crypts of Egypt, giving somewhat of a macabre feel to color processing.

You have to go back to the 18th and 19th century. Sometimes called Mommia or Egyptian brown, a rich brown pigment, somewhere between burnt and raw umber, was used by many artists throughout Europe. There was only one drawback: the pigment was created by grinding up the mummified corpses of Egyptian humans and felines.
According to the Natural Pigments, “Grounded mummies made a pigment of an undefined organic composition due to the decomposition of the mummy and the various resins that covered them. It was used primarily in watercolor and oil painting techniques….A pigment of this color was also prepared from bitumen or asphaltum.”

This bizarre process dates back to the 12th century when mummies were ground up into a powder for medicinal purposes (supposedly good for stomach problems and wounds).  In time, Mummy powder became so popular and expensive, Egyptian tombs were ransacked for their bodies as well as the other treasures they held. By the 16th century mummies were more plentiful as new discoveries found more burial sites with thousands of mummies. It seems that although mummification was originally used by royalty,  it later came into practice for everyone, thus the increase in numbers. In fact, mummies were so plentiful in the 1500s, they were being shipped to Europe by the truckload (well, maybe the cart load back then).

So what happened to the pigment? The conventional answer is that once artists learned how the pigment was manufactured, they stopped buying it. Urban legend says that one artist was so disturbed by the contents, he swiftly dug a grave and buried his tube of paint. I have also read that there was a mysterious disease that was floating around in Europe and the pigment mixture was blamed for it.

Interestingly, there was an article in Time magazine back in 1964 that talked about the last batch being made by C. Roberson & Company, a British paint maker. One of its employees was quoted as saying, "We might have a few odd limbs lying around somewhere, but not enough to make any more paint." Do you think he was pulling our leg???

Earth Colors Today
Earth pigments usually have included those that are yellow, red, brown and darker violets (like Mars violet. As you can see on the earth color hue section of the CIELAB a*b* plane, the colors range from Hansa Yellow to Mars Violet. In my readings, I’ve also learned that some folks even consider Terra Verte (Green Earth) as part of the earth color family. But for now we’ll stick to this part of the CIELAB wheel.

Since we explored yellow last month, I want to jump right into those colors I deem earthier: the siennas and the umbers.

Siennas
Sienna comes either raw or burnt. From limonite clay this was one of the first pigments used by humans. It was most common near the city of Sienna in Italy until the 1940s. But can still be found in other areas such as Sardinia and Sicily as well as our Appalachian mountains. When raw sienna is roasted it is called burnt sienna, which is used more commonly than the raw form. Some artists even use the burnt version as red on their palette. I like them both. Siennas usually do not stain and lift well in watercolor. 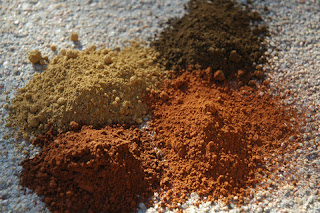 Umbers
The umbers are a deeper brown which contain iron and manganese oxides. First extracted in Umbria, raw umber is also roasted to create the burnt umber color which leans toward red. Today the best comes from the island of Cypress. In the past, these pigments were mixed with blood, urine, animal fat, saliva or bone marrow to form a paste. Umbers can have a greenish look to them, can stain in watercolor and are great for doing underpaintings in oils and acrylic. I also use my umbers in place of black sometimes.

Ochres
The orchres come in warm reds to earthy yellows. Yellow ochre is a natural mineral consisting of silica and clay with its color coming from the mineral form of red oxide. The pigment can also be used to create a reddish tint known as red ochre (when heated) and even more rare, purple and brown ochre 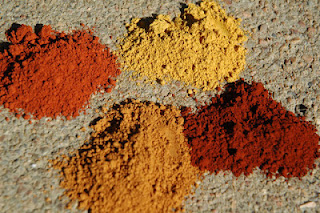 Ochre is one of the oldies but goodies in the painting world, dating back to prehistoric caves with rock art and even pottery. Synthetic ochre or Mars yellow have been in use since the 1920s. The pigment slightly stains in watercolor and can be lifted fairly well.

A couple of browns
Van Dyke Brown was highly popular with the Flemish masters (Rubens, Rembrandt and Van Dyke (thus the name). Made with humus, peat and iron, the pigment was highly fugitive and caused the paint crack over time. Today the pigment is made synthetically with shades ranging from pale brown to black. It can still be fugitive and is somewhat transparent. Some artists use it in place of umber.

Back in the Roman days, Sepia was made from the ink naturally residing in the sacs of cuttlefish in Adriatic Sea. Used for ink by the Romans, the pigment later found its way onto the watercolorist palette. Today it is synthetically produced using black, brown and red-oxide pigments.


Here are my photos from my "color" book, which covers all the earth colors I have in my studio. Noticed, I don't have a whole lot in acrylics: 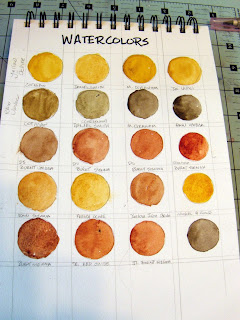 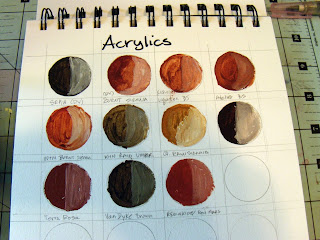 Next month I’ll cover black and white. There are differences!
Posted by Jill Jeffers Goodell at 2:05 PM No comments: