The Drawing of Santa

If it weren't for Clement Moore, author of The Night Before Christmas (1823) and artist, Thomas Nast, we probably wouldn't have the Santa Claus we enjoy today.

Originally, the idea of Santa Claus evolved from the Dutch Sinterklauss, who stems from St. Nicholas, a bishop from Greece, usually celebrated on his holiday of December 6th.  Our current-day Santa has many similarities of the Dutch counterpart—the red garb, the large white beard and helper (servant) named Zwarte Piet or Black Peter (see boy looking in the window).

Our contemporary Santa began his visual journey from a mid-19th century editorial artist, Thomas Nast, who worked for Harper's Weekly. His first Santa appeared in January, 1863, where Santa was giving gifts to the soldiers in camp during the Civil War. 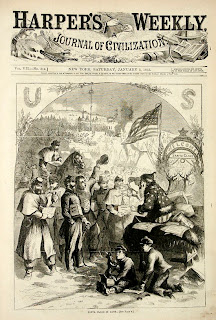 The next time Nast draws him, Santa is a kindly old man with pipe in hand for a Harper's Weekly Christmas Eve spread.

Years later, in the midst of the Victorian Age, Nast illustrated the most famous Santa of all: Merry Old Santa Claus, which appeared in Harper's Weekly, January 1, 1881. The time was plumb for this Santa, who was adored by the Victorians and loved by their children. Nast has also been credited with creating Santa's home in the North Pole, the helpful elves, letter writing to Santa and only gifts given to good children.
From an illustrative viewpoint, this Santa is work of superb inkwork. Notice all the hatch and cross-hatch work. Below you can see more of his illustrations with Santa and children, all with the same craftsmanship. 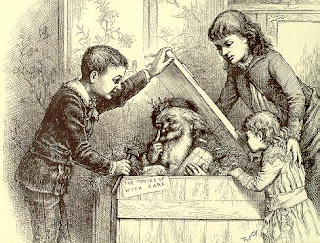 Our modern-day Santa took on a more robust look when Coca-Cola "hired" Santa to be their visual spokesman. During the holidays, soft drinks didn't do as well. So to beef up sales, Coke really hired an illustrator named Haddon Hubbard "Sunny" Sundblom (June 22, 1899 – March 10, 1976). Using the Night before Christmas as his model, Sundblom painted the first Santa, while working for  D'Arcy Advertising Agency.
Again, taking a closer look at this painting of Santa, you will find a wonderful painting with settle brush stroke for the beard and a interesting use of light.

Feel free to visit my new page at  Glastonbury Studios Facebook  to learn more on this subject. In the meantime, have a happy holiday season and I wish you a great new year in 2011. I'll be back next month with an article on the sketches of Rembrandt.

The other night in one of my drawing classes, I was working on a rendering of a dog. I often draw my class assignments before my students arrive, but this term, I've been working along side them at my studio. It's been fun and rather spontaneous, that is, until last night.
For the life of me, I just couldn't get this cute little dog down on paper. I'd lay down one sketch, then pull the sheet out of my book. The second page went in the same direction. By the third try, I was feeling very frustrated and maybe even a little embarrassed. After all, I'm the teacher—the one who's supposed to show how “easy” it is to draw. Fortunately, I didn't have egg on my face too long. My fourth attempt was satisfactory. But it wasn't until everyone went home that I finally drew another (my fifth try!) and achieved what I wanted—a decent rendition of a darling little pooch.
My point? Perfection cannot be achieved immediately. We sometime struggle to get what we want--guess that's why they call it art "work."  Indeed, many artists develop studies before they commit to a final piece. Georges Seurat was one such artist. Born in the mid-1800s, he is credited as the inventor of pointillism, although Johannes Vermeer had dabbled with the concept years earlier. Similar to stippling in drawing, one uses small dots to create the subject. But unlike stippling, pointillism uses small dots of color that blend to give the illusion of another color. For instance, Seurat would not mix yellow and blue on his palette to create green, but place both colors together to create an “optical” green. A very difficult task.
One of his greatest paintings is A Sunday Afternoon on the Island of the Grand Jatte (in French: Un dimanche après-midi à L'Ile de la Grande Jette) shown below (click to see a larger view): 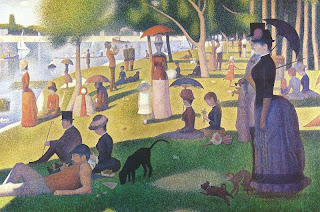 Notice that this entire piece (measuring 6ft X 10 ft 1 in) is entirely created by placing one colored point next to the other. Displayed in 1886, the painting took Seurat two years to create. But more importantly, he visited the park —the Grand Jatte—day after day to create studies, both drawings and small paintings before he created the final product.
For example, here are a few drawings he created in Conté crayon in preparation for the painting:


But Seuret didn't just stop at drawing (which by the way, he practiced drawing in black and white for an entire year). He also did study after study on small canvases. Notice the similarities and the changes that appeared on these studies. 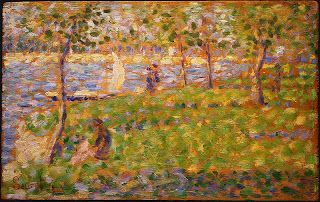 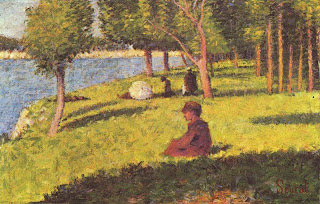 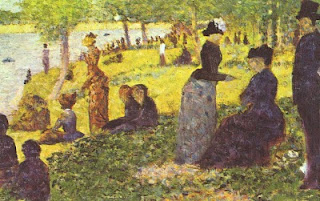 And one more look at the final work: 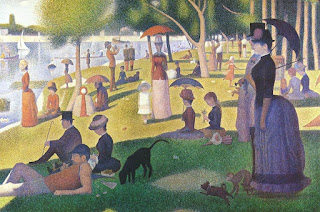 So don't get frustrated if you have to do a drawing over and over again. I can guarantee the subsequent drawings do get easier and you also find yourself adding and subtracting as you go along, which ends up being a true “work” of art!
(Note: many people wonder about the monkey that the ever-so-proper woman has on a lead in the painting—especially when in the 1800s monkeys were symbolic for prostitutes. Any theories???)
Next month, I'll be talking about the art of Santa Claus....
Posted by Jill Jeffers Goodell at 1:03 PM 1 comment: