Composition and design can be such subjective topics. Literally, what is one man's art can be another man's junk. I think we learn that especially through my Composition and Design workshops. Play a couple short perception games and we see that one person's view can be so far skewed from another. Rule of Thirds When discussing composition and design, we must first look at one major concept: the Golden Mean (or golden ratio, golden section or divine ratio). As you can see with the grid below, there is an exact science to dividing your pictures. Without getting into too much math here, the Golden Mean has a ratio of 1 to about 1.618. 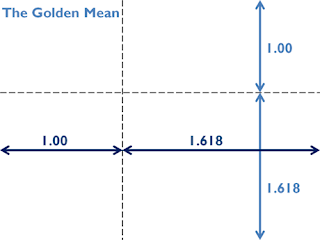 You might ask, "Who cares?" Well, it appears that nature itself has this ratio. I've read that even the human body is set up this way. For example the the lower half of our body is 1.618 as long as the upper half. We use this Golden Mean by creating the rule of thirds--the closest way to follow the method. Thus, we divide our canvas into thirds or six sections. The rule of thirds gives us a guideline to where things go. Consider a landscape, the first third could be the foreground where everything is close up, the second third could be the midground and the last third could be the background where everything is blurry. What's more, at the intersections, we have what are called hot spots or sweet spots. This is where the focal point can be placed. We can have the focal point on one spot or as many as three. The rule of thirds also prevents us from splitting our pictures in half. Instead, we want to arrange our paintings with the pleasing layout of thirds. See the grid below and then the grid on top of the woodcut: The Great Wave off Kanagawa by Katsushika Hokusai (c. 1829-32 25.7 × 37.8 cm.). Notice how the wave covers three of the hot spots and takes up 2/3 of the painting. A perfect example using the rule of thirds! (However, as I've always stated, you are the artist and the design is up to you. Just remember the rules before you conscientiously break them.) 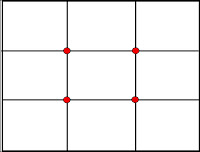 Below are some pictures that were discussed recently in the composition and design workshop. I've included the title, artist, date and some background when I could find such information. Students who took the class will notice that some paintings, which were somewhat troublesome in class, were indeed cropped during the process of printing. Click on the pictures below to obtain larger sizes. The Execution of Lady Jane Grey by Paul Delaroche (1833) 8'x 9.7' Oil on canvas National Gallery, London Click on picture as well as detail 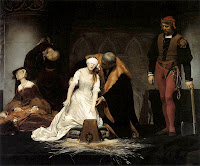 A mere child, Lady Grey was the Queen of England for only nine days. She and her husband were executed on the same day. He on Tower Hill and she inside the Tower grounds. Although Delaroche depicts the execution as an act done inside. She was actually beheaded outside on the lawn facing her quarters. The Britannia site states that upon approaching the chopping block, "Jane... tied the 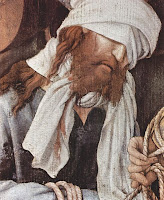 handkerchief around her eyes. Unable to locate the block, she became anxious, 'Where is it? What shall I do? Where is it?' she asked, her voice faltering. Those who stood upon the scaffold seemed unsure of what to do. One of the standers-by climbed the scaffold and helped her to the block." I think we can really feel Jane's apprehension in Delaroche's painting. Here is another example of a white cloth used to show inner anxiety. Notice the detail of the painting The Mocking of Christ by Matthias Grünewald. Christ is in similar agony and apprehension with the blindfold on. Flaming June, c.1893 Lord Frederick Leighton 47 3/8 "× 47 3/8 " Oil on canvas The Ponce Museum of Art in Ponce, Puerto Rico 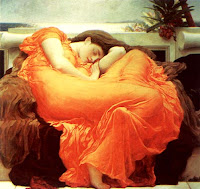 In 1830, Frederick Leighton was born in Yorkshire, England. Although he began as a painter of history and mythology, he became the leading neo-classical artist of the Victorian era. He has an interesting background which you can find by clicking on the link above. As we discussed in class, this painting is a great example of the S curve or even the zig-zag line.Leighton's excellent use of lighting really helps us to move into the picture and view this young woman's nap. Notice how all the folds on her dress sort of "frame" the girl's long legs and torso. Please note that the photo used in class was indeed cut off on the sides to accommodate the 4 x 6 format. I'm impressed with those of you who suspected that. Good observation. Paris Street, Rainy Day, 1877 by Gustave Caillebotte Oil on canvas 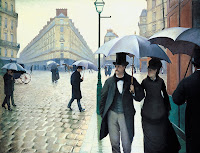 I'm not sure if I read this or discovered it on my own, but Gustave Caillebotte's painting Paris Street, Rainy Day, breaks one of the major rules in composition called segmenting. If you will notice the lamppost, you will see it splits the painting almost in half. Thus, I see two different pictures here. One of the people and one of the building in the distance. Does this take away from the painting? Of course not. It shows however, you can break rules and still carry off your message--which in this case is rainy day in Paris. I can feel the cold and inhospitable weather. Further, there may have been a deeper meaning behind the segmentation. As I have not researached the piece in great length, I am only offering my observation. Apple Tree with Red Fruit, 1902 Paul Ranson 85,1 x 118,7 cm. Oil on canvas

A post-impressionist, Paul Ranson's (1864-1909) Apple Tree with Red Fruit demonstrated his use of decorative art, using nature and symbol images. He, along with Paul Sérusier, Maurice Denis and Pierre Bonnard started the Nabis movement in 1888. Meaning "prophet, Nabis members leaned away from the Impressionist, using art to express one's inner feeling through symbolic and metaphoric ideas. Some would say that this was the beginning of abstract artwork, leaving realism and representational art behind and picking up a new baton for expression. 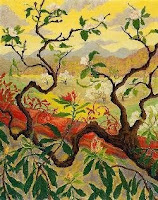 Ranson's work in particular, was highly influenced by the Japanese art explosion in Europe in the late 1800s as well as Art Nouveau, both emphasizing the organic and highly styled manner. You can see the Japanese influence in the painting to the left called, A Japanese Landscape. Also, notice the similar palette and diagonal lines to draw you into the picture. Apfel Und Weintrauben by E. Krueger Oil on canvas 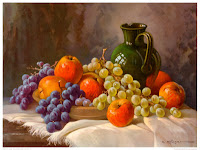 I looked for information about E. Kruger on the Internet. However, all I could find was her work for sale at art and poster shops but no biography. Even so, we have lots to talk about when we consider composition. I personally love still life. When I returned to fine arts, I had a great drawing teacher, Renee Paudler. Although she was one of those instructors who didn't demonstrate (I need learn by hearing and seeing), Renee was a damn good teacher. She taught me how to really look at any object--hone in on it like an eagle. I really appreciate this still life because (1) I know how hard it is to paint it ,(2) The composition is superb. Everything is placed together in order to give the star its place on the stage, and (3) I love the lighting and colors. Even the white cloth has touches of color that unifies the whole picture. The Wedding Dance, c. 1566 by Pieter Bruegel the Elder oil on wood, 47 x 62 inches 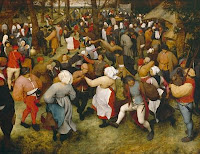 Here is an example of how perspective improved from the Middle Ages to the 16th century. Pieter Bruegel, the Elder painted many pictures of peasants. This one being my favorite. If you will notice how the dancers are in varied movement, large and fully detailed in the foreground and less so in mid-ground and even somewhat lost in background.

In comparison, here is a painting of the medieval period where perspective has not been used. Called Medieval Peasant Meal (found no attribution), the painting shows people who are relatively the same in size. The one thing that I notice in this painting is that the background is in blue and smaller. Perhaps the beginning of some perspective knowledge. For more information go to: evolution of perspective at Wikimedia. 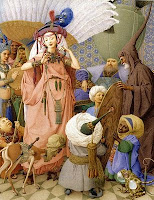 Modern vs. Medieval I originally thought this was a medieval piece. It has all the trappings, but one of my students recently informed me that this painting was done by Olga Dugina and Andrej Dugin for the book The Adventures of Abdi (c) 2004 by Madonna. This illustration is highly complex and a wonderful example of how you can "suck" a person into your picture and keep her there. A visual delight. So this ends my exploration of perspective. In th next few months, I'll be examining other artists to help us both learn more about our craft and its past Thank you.
Posted by Jill Jeffers Goodell at 9:00 AM 4 comments: